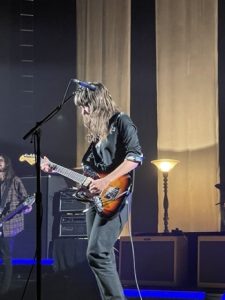 Atmosphere.
Indoor show. Outside temps were in the low teens, so I was a bit worried about a hospitable turnout. But Courtney fans would not be deterred, and showed up in droves to celebrate the release of her newest album. Courtney’s music appeals to all generations, and it was beautiful to see a very young girl have the opportunity to give her flowers during the show. The only negative experience of the evening was one unruly college kid who decided to forcefully push his way up to the front about 3/4 through the set. However, the situation was quickly resolved when a rather scrawny older gentleman became the enforcer. He wasn’t having any of it.

The Venue.
Kemba Live (f/m/a Express Live) is an indoor/outdoor multi-purpose concert venue located on the westside of the Arena District. The indoor concert seating capacity is ~2,300, while the outdoor seating capacity is ~5,200. The shows are predominately general admission, but seating is available for select shows, or on a limited basis. Enjoy Mikey’s Late Nite Slice and a beer while visiting the venue!

The Band(s).
Courtney Barnett, f/k/a as Courtney Barnett and the Olivettes or Courtney Barnett and the Courtney Barnetts, are currently touring after the release of her latest album, Things Take Time, Take Time (released Nov 2021). Her first album Sometimes I Sit And Think, And Sometimes I Just Sit was released in 2015, for which she received eight nominations at the 2015 ARIA Music Awards – taking home four awards. She was also nominated for Best New Artist at the Grammy’s that year. The band consists of Bones Sloane (bass, vocals), David Mudie (drums, vocals), and for the current tour Stella Mozgawa (keyboard, percussion, vocals) who co-produced the latest album. The music is widely considered to be indie/alternative rock or dolewave (a subset of the Australian indie scene – google it for context), but it feels like modern blues or alternative folk rock at times. It’s edgy at times, and calming at others. It is very candid and raw. The songs are guitar centric, boasting Courtney’s ingenious guitar style which feels jangly and discordant, yet intentional and purposeful. She plays left-handed guitars, and does not use a guitar pick claiming that she never liked the sound of the pick striking the strings. She adapted a wide array of licks that have roots in traditional blues, rock, alternative/indie and country twang. Much of the guitar sound is distorted using fuzz boxes, but it’s not just garbled noise and she balances neatly between both rhythm and lead (which she plays both simultaneously). The vocal delivery is rambling and deadpan (dry and deliberate without emotion), and the lyrics can be satirical, yet entirely relatable to our everyday lives. Each song is a unique story that becomes personal to listener. Her onstage presence is both powerful and vulnerable at times, which compliments the darker and lighter side of her music catalog. Visually, the stage was set up to be reminiscent of an evening in a low-lit living room, and there was not a lot of distracting flashes of lights, lasers, or anything of that sort. Courtney’s musical style is unique among a crowded space of indie/alternative rock artists, sort of like how the White Stripes stand out in the same space. I highly recommend that you check her out the next time she stops by Columbus!

BONUS – Something very cool that Courtney has on her website (click here) is a stem mixer. There are ten tracks that you can play around with, adjusting the volumes of various instruments and vocals to give it your own unique sound. It also includes a looping tool, so that you could loop a certain part of the song. This would be useful if you are learning to play the song on guitar, or some other instrument. 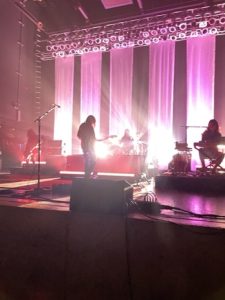 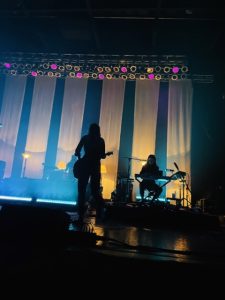 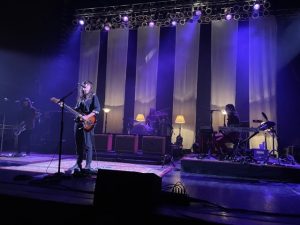