POPPY AT THE NEWPORT MUSIC HALL

The Venue.
The Newport Music Hall is an indoor concert venue located on High Street on the Ohio State University campus. The venue is Promowest’s second largest in Columbus, Ohio with a capacity of ~1700. The shows are predominately general admission, but premium seating is available for select shows, or on a limited basis. The Newport is billed as the longest continually run rock club in the country. Check out a short documentary regarding the Newport here [If These Walls Could Talk].

Mz Neon, the opening act, is a transgender rap artist. As stated on her Facebook About, “Neon Music is a transdisciplinary artist, musician, actress, DJ, mystic and muse based in New York City and Los Angeles”. Mz Neon is very ‘sexually‘ explicit on-stage. She is accompanied by what appears to be her shirtless, bondage wearing sex-slave that manned the electronics and occasionally played guitar. The vocals were primarily rap lyrics, with some singing chorus lines, all backed up by various hip hop, punk, and techno beats. Due to the graphic nature of the music, it’s certainly not for everyone. It was entertaining though.

Watching Poppy perform was a damn-good-time! I would expect nothing less from a YouTuber performance artist turned straight up metal star. Poppy, born Moriah Rose Pereira in Whitman, Massachusetts in 1995, uploaded her first of many many videos to YouTube in 2014, entitled Poppy Eats Cotton Candy. In the video, she sits silently consuming cotton candy and displays a small smile and laugh at the end. In her next video, entitled Thursdays are So Boring, she sits silently alongside two figures dressed in colored skin suits that are painting her nails. I believe that she is supposed to be some kind of soft spoken, shy android discovering the world around her. I don’t know for sure, but if you like to watch some eery, strange art, it’s worth some of your extra time to explore. On stage, Poppy appears bubbly and dark, full of charisma and energy. She flaunted a short red skirt and jacket, a pair of calf high black metal boots, and a set of impressive long pig tails that whipped around furiously. She seldom addressed the crowd with her soft spoken voice, but her singing and screaming were nothing but power. Poppy commanded the stage, thrashing and stomping to the heavy licks and beats. What I enjoy about her music is that each song takes you on a journey that combines heavy metal (and nu-metal) riffs with ferocious growls and screams, that are instantaneously transformed into sweet and innocent melodies, breakdowns and chorus lines. A number of her songs, like Concrete for example, goes from being metal to a pop song in a beat. The musicians were fantastic too. Their stage presence was energetic and they kept the entire show moving along from beginning to end without long or awkward pause. Lighting and stage design was pretty good for a smaller venue like the Newport. Bottom line is that Poppy Rocks! Or Poppy Pops! Or both! 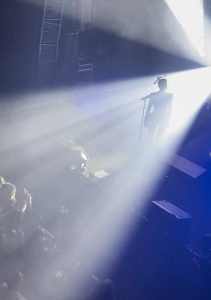 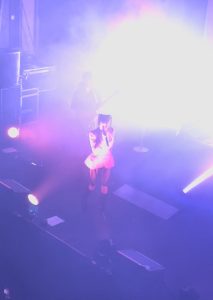 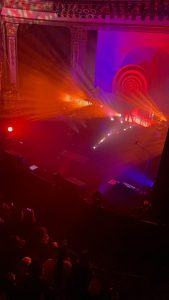 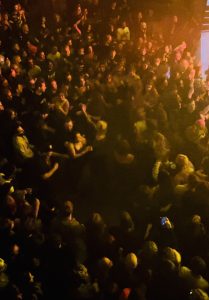