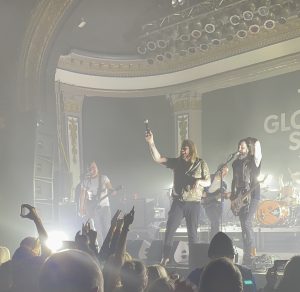 THE GLORIOUS SONS AT THE NEWPORT MUSIC HALL

Atmosphere.
Indoor show. The age range of the crowd spanned from elementary kiddos to the golden years, but the vast majority were in their 30-40’s. This was the type of crowd that understands a concert is a joint experience between the fans and the band. Everyone is respected, and it feels somewhat like a family. It truly was ‘fun’ to be a part of it.

The Venue.
The Newport Music Hall is an indoor concert venue located on High Street on the Ohio State University campus. The venue is Promowest’s second largest in Columbus, Ohio with a capacity of ~1700. The shows are predominately general admission, but premium seating is available for select shows, or on a limited basis. The Newport is billed as the longest continually run rock club in the country. Check out a short documentary regarding the Newport here [If These Walls Could Talk].

The Band(s).
The Worn Flints, the first of the two openers, was a very pleasant surprise. The band is a three piece that was formed right here in our own backyard (Columbus) in 2015. They’ve had local success with previous appearances at the Newport and airing on local radio station CD 102.5. It was really awesome to watch lead singer/guitar player Kenny Stiegele OWN the stage. They sound a little bit like the White Stripes, or a tamer version of The Mars Volta.

Brother Elsey, the second of the two openers, was the ‘easy-listening’ rock band of the evening and can be described as Americana, Heartland, and Southern Rock. The band consists of the three Stablein brothers from Detroit, including identical twins Brady (lead singer/guitar) and Beau (harmonies/bass), Jack (harmonies/guitar), and honorary brother Dalton Thomas (drums). This quote from the band’s website exemplifies, through words, their charismatic stage presence… “Bonded by the ties of blood and bone, Brother Elsey unearths its heartfelt sound from the depths of the human spirit”. Check ’em out the next time they come through town.

The Glorious Sons (TGS), a Canadian rock band from Kingston, Ontario (near Syracuse, NY), is led by the enigmatic, and very enjoyable, Brett Emmons. Other members of the band include Brett’s brother Jay (guitar, vocals), Chris Kostser (lead guitar, vocals), Adam Paquette (drums, vocals), and Josh Hewsom (piano, vocals). I spent some time trying to come up with words to describe TGS, but I just can’t say it any better than how they describe themselves… check it out here [ABOUT]. Brett wildly dances around the stage in a confident, yet very genuine and inviting demeanor. The performance is an outpouring of soul intended to be shared with the world. The show is loud, unrelenting, and energetic, yet emotional and uplifting. The lyrics are raw, real, story-telling, and therapeutic. The songs sort of feel like a passing storm with a brilliant sun peaking through an opening in the dark clouds. I stumbled upon them online a week before the show at the Newport, and I just knew I had to go. I am very grateful for bands like The Glorious Son. They are positive, and REAL. They have had huge success in Canada, and their popularity is quickly growing now that they’ve been able to tour internationally again. We’ll be seeing these guys for many years to come!

A few words to describe the show.
Raw, a collective experience.

Would I see them again?
Easily – Yes! 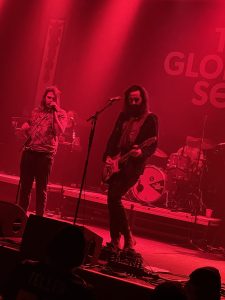 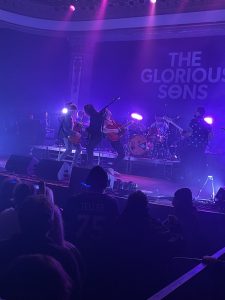